QUIET COMPANY RETURNS TO TORONTO – AND WE’VE GOT THE PICS TO PROVE IT!

The boys are coming back … ….And did we mention we have tix?!

We’re doing an EPIC giveaway including two tickets to their June 15th show with Third Eye Blind and Dashboard Confessional, a vinyl edition of Transgressor, a big ole’ plate of King’s Crown nachos and a pitcher of beer to boot.

Visit our Twitter page to find out how you can win!

If you don’t know who Quiet Company are, you’ve clearly been living under a rock.

They actually dropped by our humble abode last week. The melodic indie rockers were in town for their spring tour, in promotion of their recently-released new full length album, Transgressor. It’s the sixth album from the wickedly talented Austin-based group. Founding member and lead singer, Taylor Muse’s songwriting embodies a newer, more mature sound that sounds like both power pop and indie rock, creating a collection of dope progressive rock tunes. Transgressor pumps out jam after jam, starting with “The Most Dangerous Game” as the stand-out single – which has a production credit from Manchester Orchestra‘s Andy Hull. Not bad company to be in.

The guys came by with tired eyes and empty stomachs, looking for some good ole Dee’s hospitality. And you bet they found it in our infamous King’s Crown nachos.

Here is their story:

“Come on boys, everyone put on a smile! When in Toronto, do as the Torontonians!” – Thomas

“Finally, time to get eatin’. Keep the cheese on the side though…” -Matt

“ Want to see me eat this huge glob of refried beans? I wonder what just fried beans taste like…” – Matt

We make sure everything has a Dee’s twist to it.

Got some sweet action shots of Taylor munchin’ down!

“That picture was gold. Don’t lose that.” – Matt

We’re hitting NXNE 2015 running with showcases and good news up the yin yang!

Just like last year, we’ll have our festival Cheap Eats menu rolling with $5 menu items and $3 brews – and the drinks are pouring til 4AM. You read that right.

Don’t forget to RSVP here. And check out the full line up (of music AND food) below: Join us Every Friday Night for Homesick 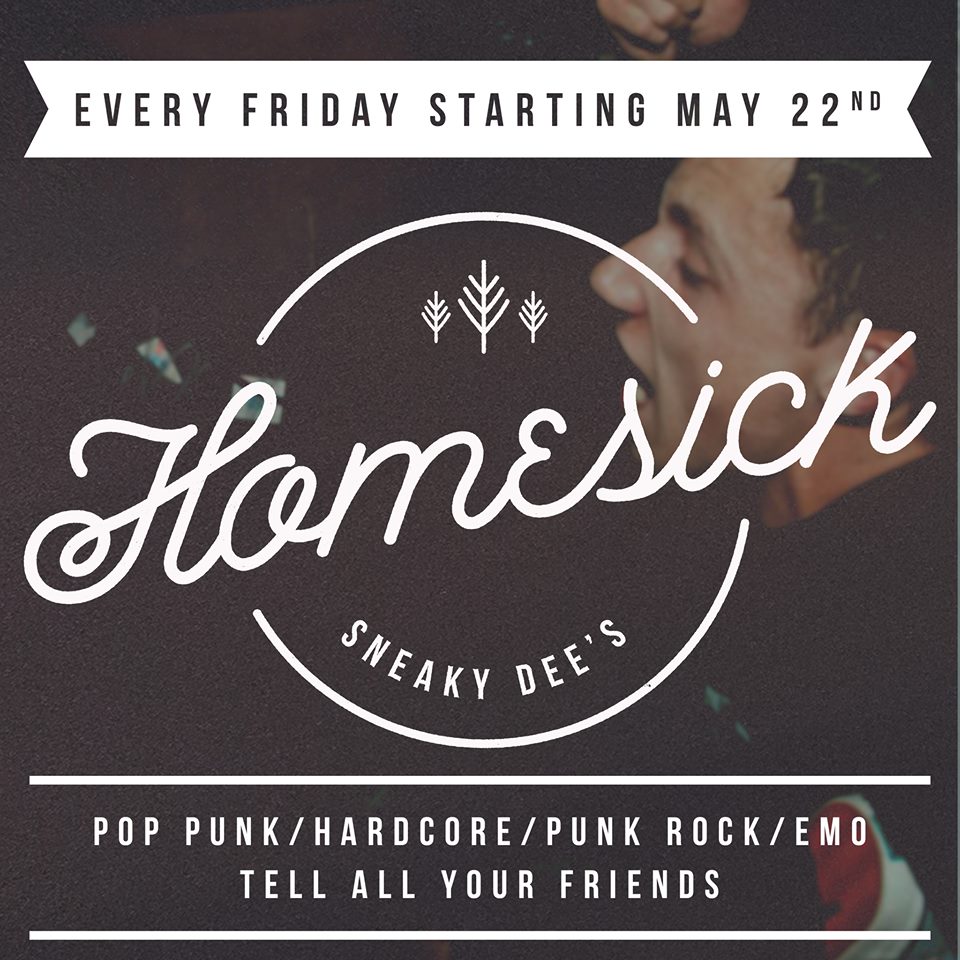 Over this past weekend, we launched our new event Homesick. Where we play all of your favourite pop-punk, emo, and rock songs from your youth.

Not only are we serving up the killer tunes, but we’ve got a free cover until 11:30, and drinks are $3 until midnight! The only other possible thing you could ask for is that they play that Brand New song you love so much. Check out some of the photos from our launch party while you’re at it. 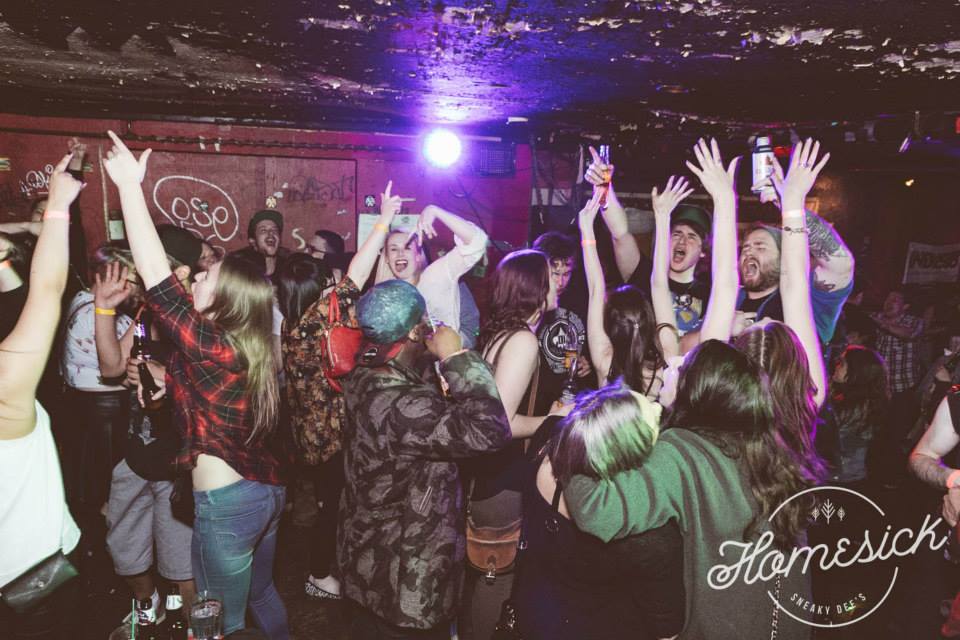 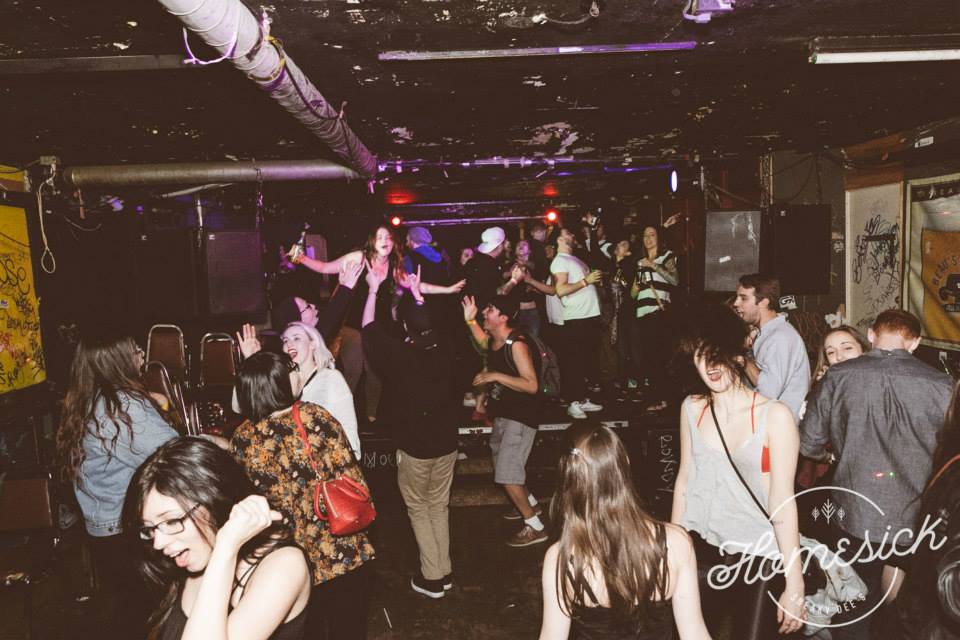 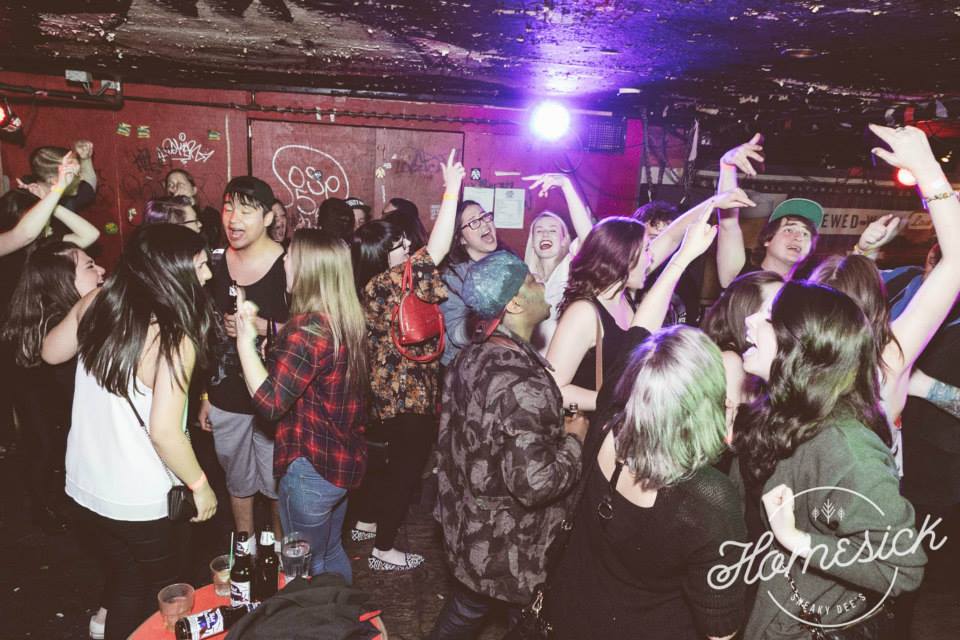 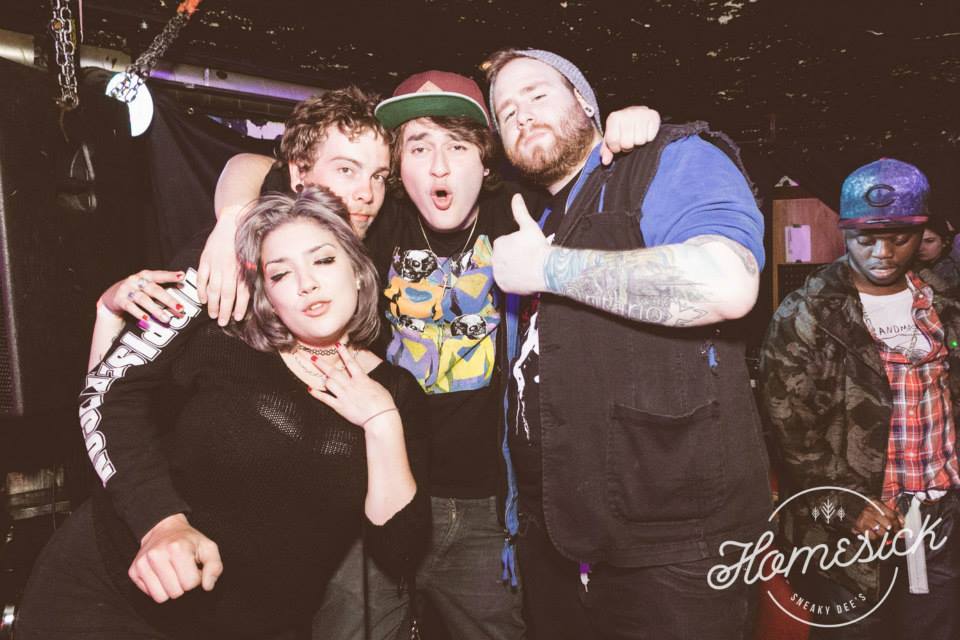 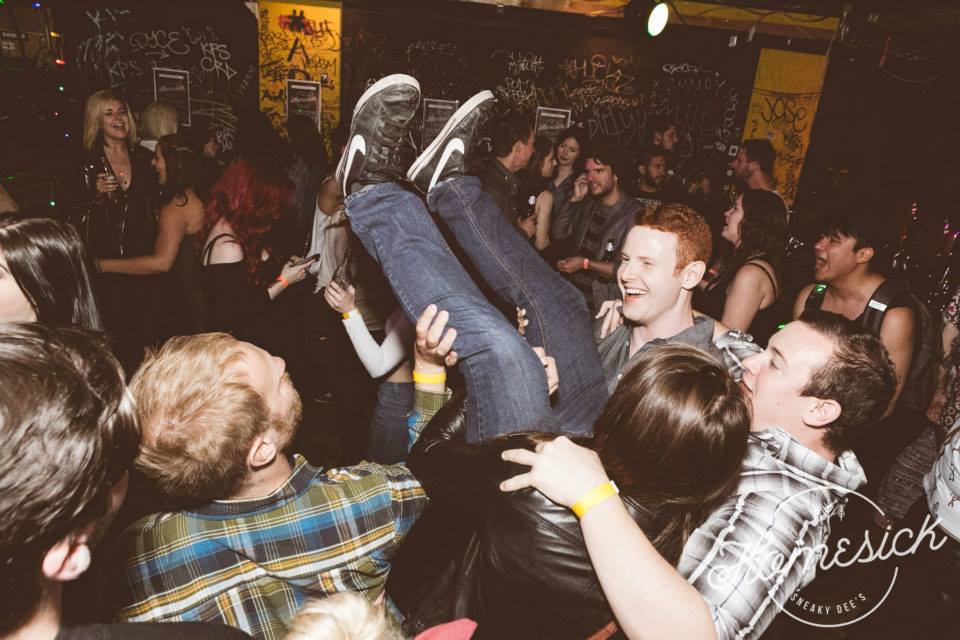 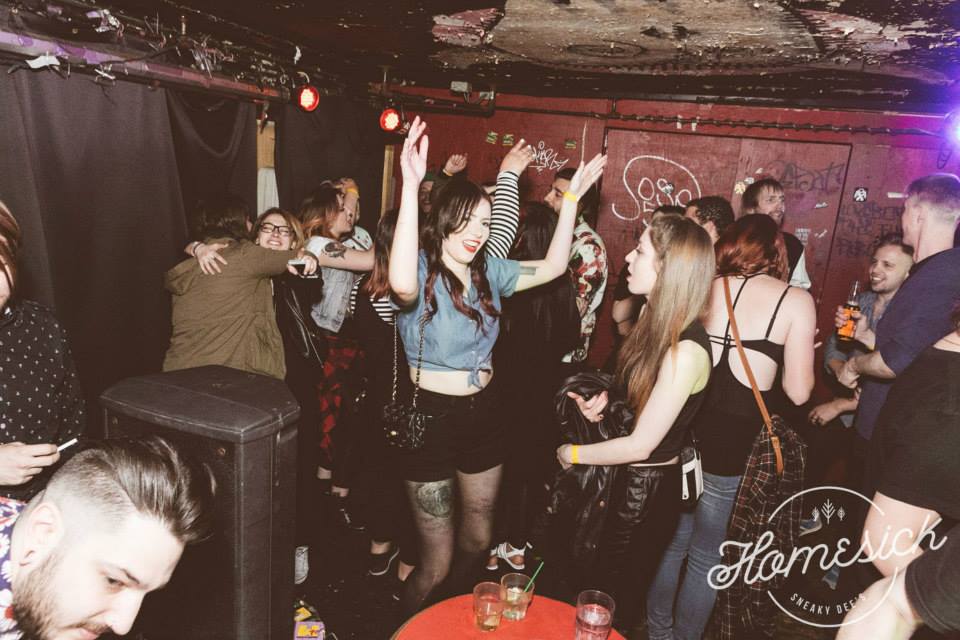 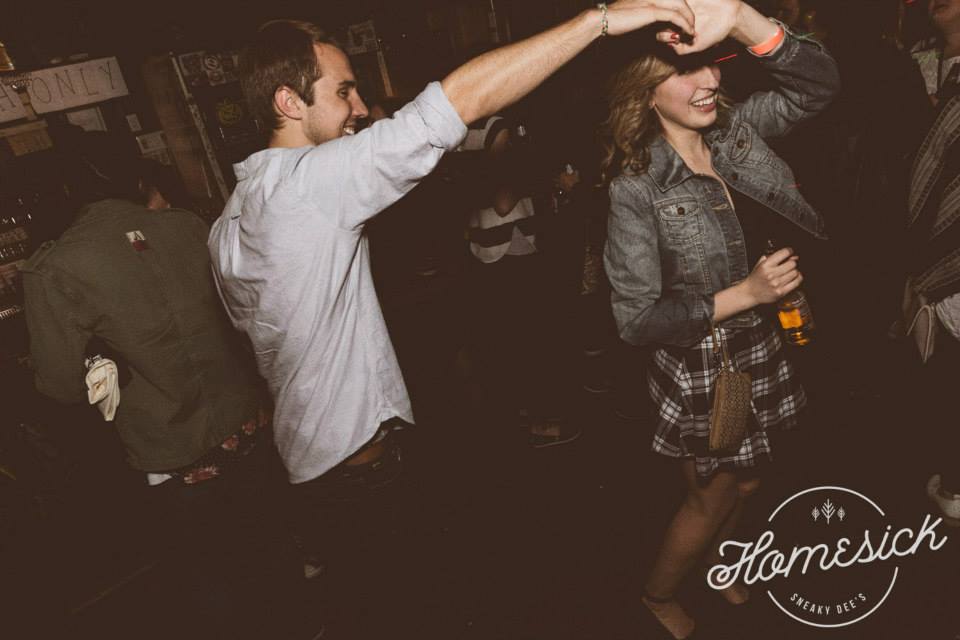 The 2015 edition of Canadian Music Week is right around the corner, and like a good friend, we’ll be coming along for the ride. When you’re in need of some late-night snacking, we’ll be there to soothe your pains. And if you just wanna see some bands, Sneaky Dee’s has you covered. Pair that with 4AM last call, and you’ve got a recipe for a night to remember (or forget!). Come meet your future ex-girlfriend. Whether you’re into OGBMs’ garage punk tones, the eclectic flavours of The Death Set, or the sultry grit of SAVVIE, Dee’s is the place to be. There’s four showcases and a SECRET GUEST on May 7 for you to kick up the dust beneath your feet.

CMW CHEAP EATS MENU IS BACK Have some time to kill during the day? Dee’s is offering up select $5 menu items and $3 brews on weekdays from 11AM to 7PM throughout the festival for all CMW artists and passholders. It’s a long week, and we want to keep both your stomachs full and your wallets happy. Life is better with Death From Above 1979 back. We fell in love all over again, called each other up, and before you knew it – BAM – we conceived a wicked collab dish. The Death From Above 1979 Nachos will set Toronto’s tastebuds on fire like the burn you get after getting rowdy to “Romantic Rights”!

The Death From Above 1979 Nachos are a Dee’s exclusive baby. It’s the first item on our menu to use fiery habanero peppers! Add to that a pile of pulled pork, jalapenos, guac, pico de gallo, black beans and cheese. If you’re a fan of spice, you can bet these nachos will become your new ‘usual’! Disclaimer: the Death From Above 1979 nachos are not for the weak of heart, so back off if you’re not up for the challenge.

We’re also gonna let you in on a little secret. To celebrate the launch of the dish, anyone who comes in and orders The Death From Above 1979 Nachos starting now through the rest of the weekend could win a #NachoBill! That means a free meal for your table! What are you waiting for?!

TODAY ONLY: Come by today between 4 PM and 7 PM for a chance to win FREE nachos, gift cards, and Sneaky Dee’s merch! Keep your Dee’s app running and your wireless on while you’re here. You never know!

HOCKEY NIGHT AT DEE’S IS BACK ON SATURDAYS!

We’re bringing back HOCKEY NIGHT @ DEE’S! Every Saturday from 7 to 10 PM (that’s just before Shake-A-Tail!), you can watch your favourite teams face off on our projector upstairs!

Whether you’ve moved on from the Leafs or are giving ‘em CPR with your cheers, it’s gonna be wild. Bet your dirty old couch doesn’t have drink specials either. We’ve got tons of that and HOCKEY NIGHT @ DEE’S food specials on game night!

Hockey is a team sport, and so is watching the game. Grab your buds every Saturday for hockey, beers, and awesome eats at Dee’s! It’s a no-brainer.

Warmer weather is right around the corner and we’re counting down the days. We’re heating things up this month to get you in the mood for spring. Drag your ass down here because March is going to be one hell of a month!

WATCH THE WALKING DEAD AT DEE’S!

The Walking Dead is almost as addictive as our nachos. There’s no need to watch your favourite gory series on your own, so come watch the show and feast on specials with us on Sunday nights at 9 PM! We’ve got the Governor’s Daughter (Bailey’s, Peach Schnapps & Grenadine) and grand chilli nachos with pitchers to keep you coming back for more. Get here early save yourself a booth!

Huge thanks to everyone who’s supported John’s family and honoured his Dee’s legacy by buying a Brother! t-shirt. We miss him tons. By popular demand, we got more in stock, so use your next twenty bucks to grab one! All proceeds will be going to supporting John’s family and the Princess Margaret Cancer Centre. Pick up yours at Dee’s or order online here.

SOMETHING YOU WHISPER AND BITTERKIDS

On March 8, we’re getting rowdy with Cambridge’s own, Something you Whisper and St.Catherine’s post-hardcore knock-outs Bitter Kids! It’s all-ages, so you’re in for a packed mosh pit. Doors open at 6 PM. Make sure you’re ready for this one because it’s bound to get wild! Grab tickets here!