At last, the legendary Chicago-born festival Riot Fest will return to Toronto on Aug. 24/25 at Fork York. Headliners include The Replacements, Iggy And The Stooges, The Weakerthans, The Flatliners and many more amazing acts! Check out the full line-up here! Of course, Dee’s couldn’t help but join the riot… We’re totally stoked to announce that we’ll be on-site in full swing, catering to the stars and vending our delicious “RIOT FRIES” to all you awesome-tastic music lovers! The good news is that you don’t have to wait ‘til Riot Fest to indulge in the deliciousness! The Riot Fries consist of guacamole, sour cream, & veggie chilli w/ melted cheese and you can get them for the price of $9.95! If you wanna get two birds stoned at once, come into Dee’s and pick up your DISCOUNTED RIOT FEST TICKETS with your Riot Fries, to get your wallet and your stomach ready for a riot! Check out the prices below… Wanna upgrade your discounted tickets to VIP!? Of course you do! All ya gotta do is follow the instructions below:

We’re stoked to party with you for Riot Fest! Let’s make this a memorable one!’

“Back in my day you had to walk through a blizzard, uphill both ways, to get to Sneaky Dee’s for some King’s Crown nachos!”

We found this picture of College & Bathurst back in the day before Dee’s was Dee’s and knew you had to see it! Now that we’re feeling all nostalgic, why don’t you join us on this journey through time, and check out a few of the wicked artists that have made their mark at Sneaky Dee’s in the past few years!

Remember when GOB came to play for our 25th anniversary? Tom Thacker saluted Toronto with “I love this fuckin’ city!”  followed by a “Here’s to you, fuckin’ TO!” from Theo Goutzinakis, right before busting out “Prescription”. It had been over three years since they were in town, and they were so stoked to be back at Dee’s! This was probably the sweatiest mid-December night that we’ve ever seen! Monotonix made quite the entrance crowdsurfing from the men’s room to the stage. We’ve heard stories of people “banging” in the bathroom, but never on a travelling drum kit… Were you there when Fucked Up packed the house in October 2008? Damian’s “Thaaank youuu!” at the end is oh so gracious. 1. The coolest bands from in and out of town eat here. Stick around long enough and you might just run into one! Need proof? Check out these links… 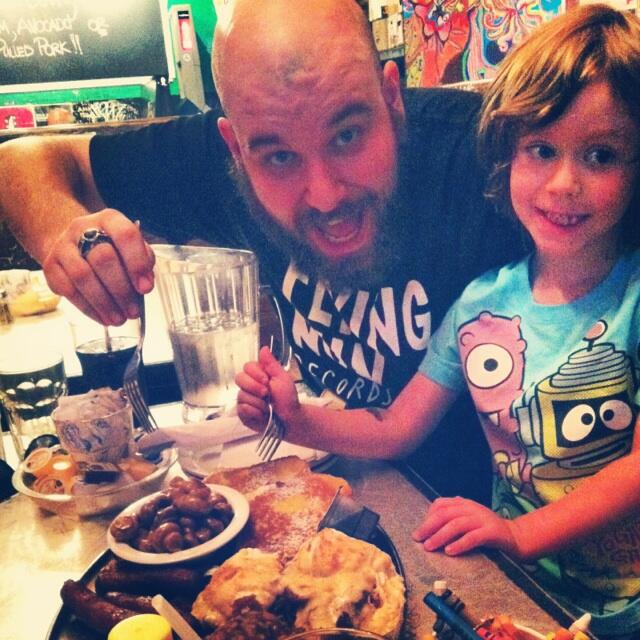 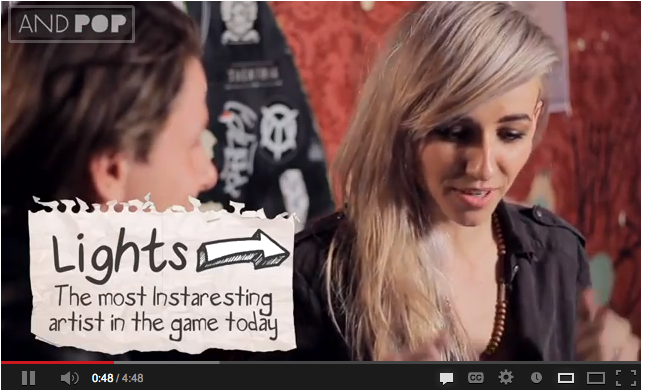 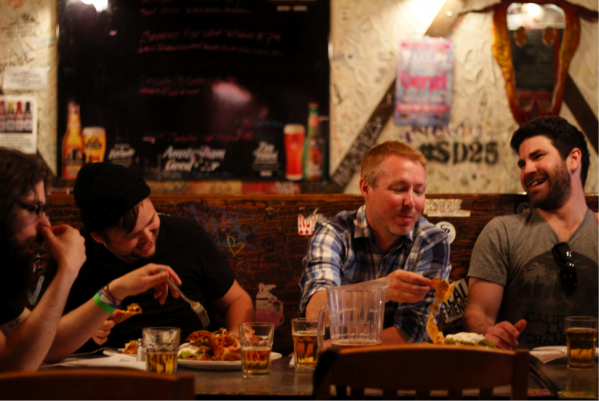 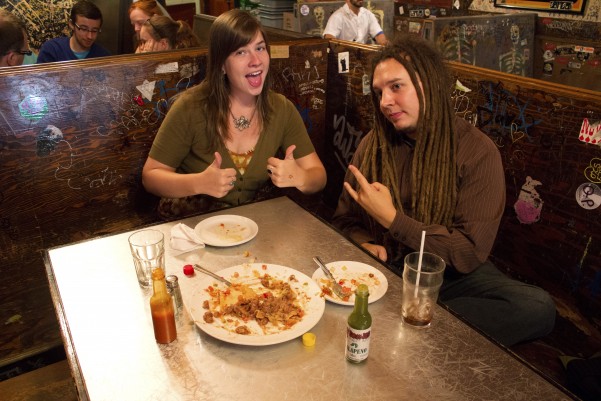 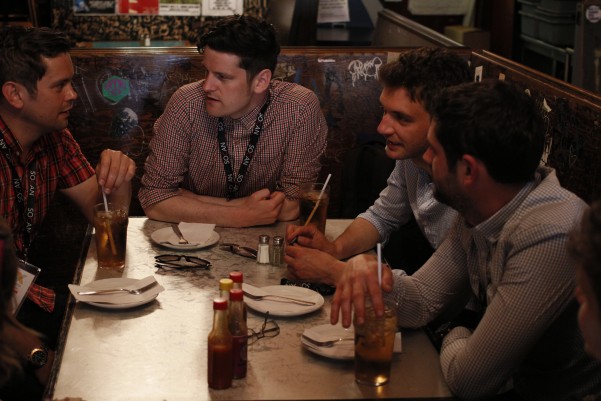 2. We have the coolest staff on earth. For instance, this strapping young lad is an exemplary specimen… 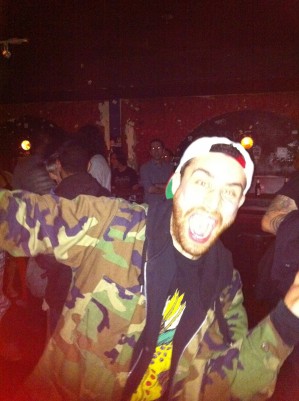 3. There’s a NIGHTLY SPECIAL for every day of the week available from 4pm to close! No matter what day you decide to swing by, we’ll have a DELICIOUS meal for CHEAP. Check out the extensive selection so you can start planning an exciting night out!

4. Our weekly events are always BUMPIN’ and there’s usually something AWESOME going on upstairs! Check it! 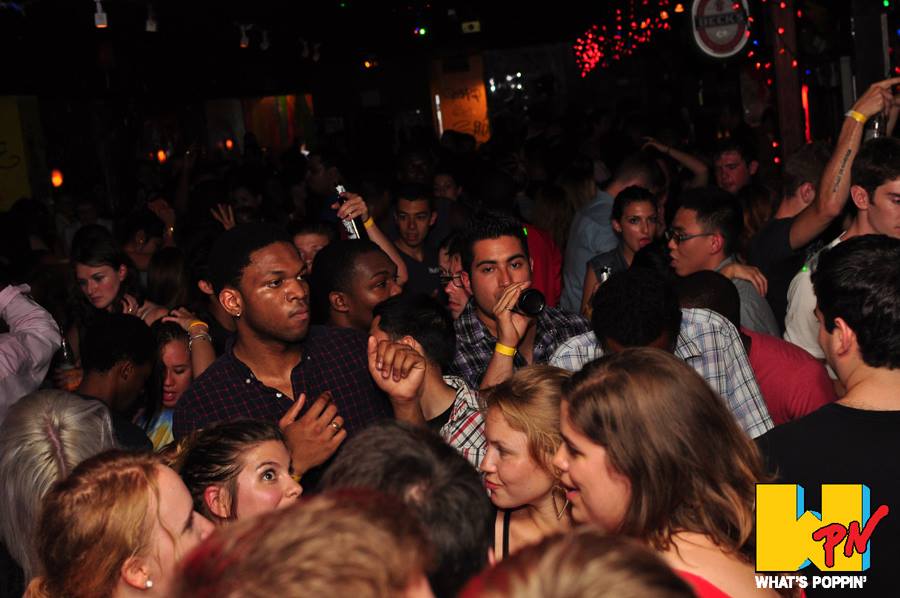 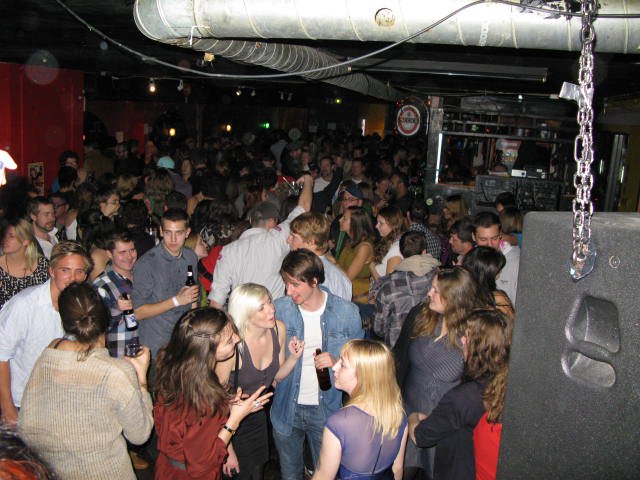 Legends of Karaoke: http://sneaky-dees.com/event/legends-of-karaoke/2013-07-22/
A chance to keep cool with a few beers and sing to your heart’s desire! Three dollar drinks before 11 and no cover!

Watch Out!: http://sneaky-dees.com/event/watch-out-6/2013-07-23/
Hardcore, emo, pop punk, metal, and all the tracks you love but thought it wasn’t okay to like now that you can drink legally in bars.

ALL our awesome events!

5. Most places will boast their “All-Day Breakfast” Menus. That’s old news at Sneak’s! What other restaurant serves ALL DAY BRUNCH!? #BRUNCHCAT knows what’s up… 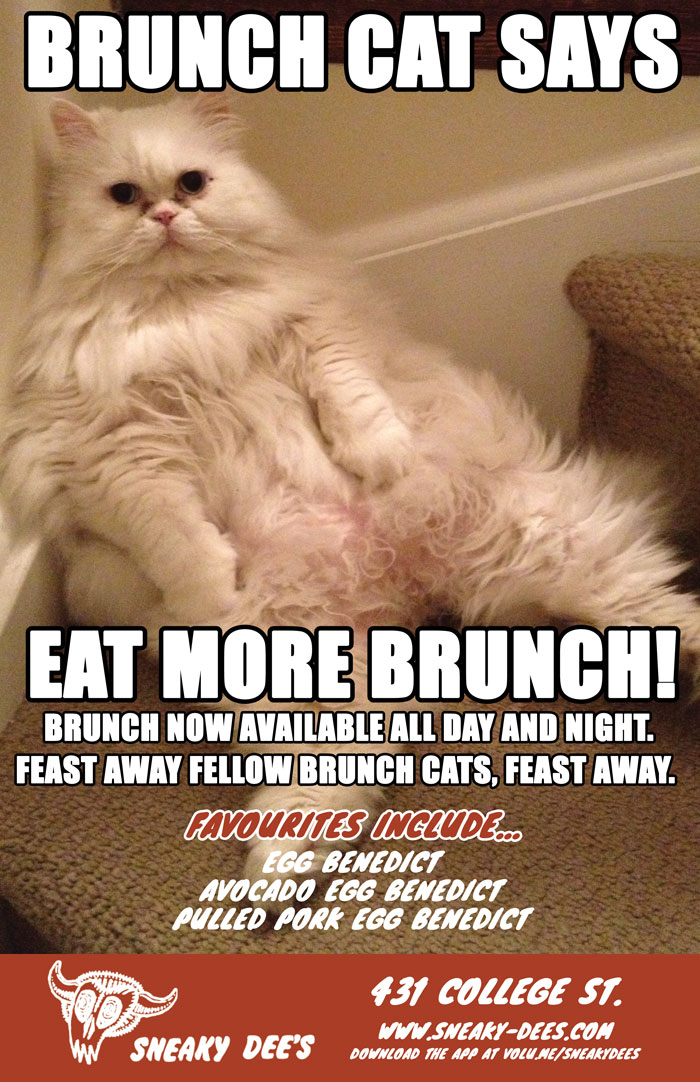 July is finally here, which means Canada just had another birthday! Come celebrate with us all month long with the completely unofficial dish of Canada: King’s Crown Nachos. We have some fantastic artists preparing to hit the stage this month. Rude Awakening, all the way from Merrimack Valley, NY, headline a sick hardcore show tonight! Toronto pop-rock band The Heights are launching their new album, Drag Race On The Moon, at Sneaky Dee’s on July 12. We’re also stoked to have Carter Hulsey of Joplin, MO, in town on July 25! You can find more information on these events + more here! Speaking of music, we unleashed two new breakfast platters this month dedicated to Toronto band, Fucked Up! So order one up after one of these shows! Bring a friend, you’re gonna need some help! And if you want to stay up-to-date on all Sneaky Dee’s happenings, we now have an iPhone APP! That’s right, a Sneaky Dee’s app. Who knew life could be so great?! We’re all excited to see your faces out this month.

A Photo Story: The Roseville Band

We can’t believe North by North East was over a week ago! We made some great memories, met so many talented artists and partied with some pretty amazing music fans. Speaking of talented artists, we were lucky to have The Roseville Band, all the way from Wrexham, Wales, come in to try our legendary King’s Crown Nachos.

The boys from The Roseville Band are no stranger to Toronto. They have played several times and were even named the 2012 Stand Out international band at NXNE! They love this city and always enjoy coming back. This time they came back to launch their brand new record ‘Temper’, which was written about their last trip to Toronto! The album was released today on Itunes, so make sure you pick up a copy! You can buy it here!

Steve, Andy, Neil and James gearing up for their first King’s Crown! Cheers boys, get ready for the best nachos of your life Look what they found, pictures of the Fucked Up Breakfast. Neil is a Vegetarian… and clearly excited! And so it arrives! Time to dig in. More importantly, what is the best way to eat this!? I bet they have nothing that compares back in Wales, although we’re sure Mint Lamb is pretty great! Make sure to dig into some of that guac! This is business! Serious nacho face! “Well that defeated me” – Andy Take some of the Hot Sauce to bring back home! Thank you to the band for coming in and trying our King’s Crown Nachos. We had a blast with the guys, and got some lessons in Welsh (which we didn’t retain).

Make sure to pick up The Roseville Band’s brand new album ‘Temper’ out today! Hey all you head-bobbin’ nacho-lovin’ party people! We’ve just released a NEW APP where you can easily stay up to date with our social media, new DELICIOUS menu additions, and events! Now there’s no reason to miss any of the fun! Wanna jam to some free tunes or check out videos shot at Sneaky Dee’s? Wanna rock some fresh Sneaky Dee’s swag or take home our world-famous hot sauces? You can do all these things and more with the app! With our new app, you can stay informed with the word-on-the-street about Sneaky Dee’s and tweet about it INSTANTLY! Don’t be left in the dark! Download the app! at:

BRUNCH IS NOW AVAILABLE ALL DAY