Mark your calendar’s for October 3! Head to Sneaky Dee’s “For Art’s Sake”! Come out to dig live local bands and DJs, cheap local beers, and of course Sneaky Dee’s signature nachos; all while supporting an amazing local organization. We’ve got a great local line-up set to perform at Dee’s in support of Artists’ Legal Advice Services (ALAS), including Bora’s Band, Gavin Slate, Dream Jefferson and WITCHCRAFT.

ALAS provides FREE legal advice to local artists of all kinds, but needs your support after being deprived of funding by Legal Aid Ontario. You can help the organization continue to offer its unique service to local community and artists just by coming out and having a great time!

In conjunction with the U of T law students, ALAS operates on Tuesday and Thursday nights out of the 401 Richmond building. The organization has been around for over 15 years and has helped many, many people in the creative community on a pro bono basis.  More about ALAS can be found here.

Tickets for the event are $10 and can be purchased in advance or at the door.

Well friends, Toronto Beer week is among us, which means all around Toronto you’ll be able to take in some amazing craft beer being showcased by local breweries. We’re excited to be featuring a few of Amsterdam Brewery’s finest at Dee’s this year. We will have three unique brews this year and will be serving them up, one at a time, until they’re gone. So get them while they’re hot! (figure of speech only! The beers are cold!) Listed below are featured beers that we will be featuring and the time and date they will be tapped!

“For this edition of our Adventure Brews Series, we experiment with our highly sought after Tempest Imperial Stout. When brewing Tempest we had the opportunity to use the same complex malt bill to create a completely different beer. The result is Calm Before the Storm – an English mild with a pleasant noble hop aroma and subtle notes of cocoa and rye. This beer gives you a unique chance to try two completely different beers that originally began as one.”

“A harvest ale brewed using a wet hop technique – fresh and locally grown Ontario hops will be harvested from the vines and used in the brew the very same day. Light in color with intense fresh hop aromas and a pleasant bitterness”

It started as an experiment that asked the question: “Exactly how many hops could fit in a beer?” Well, the brewers at Amsterdam answered that question so well that Boneshaker IPA graduated to the brewery’s line-up of always available favourites. And the beer that answered that question so admirably? An unfiltered IPA born from a continuous hopping method that blends Amarillo hops with seven different malts to produce a large hop character not for the faint of heart.

Amsterdam Brewery and Sneaky Dee’s both know that with great beer you need great food. SO without further ado… The #TapThatCask at Dee’s contest!

During Beer Week, come into Dee’s and take a photo with your Amsterdam Beer! Tweet the photo using #TapThatCask and tag @TheSneakyDees and @AmsterdamBeer and you will automatically be entered to win a $50 gift card to the spankin’ new Amsterdam Brewhouse and a dinner for 2 at Dee’s!

The contest closes Saturday night, so come in early and stay late because we have a 4 am last call from September 13 – September 21!

Riot Fest 2013 was AWESOME! We want to thank all you crazy hooligans for coming out and joining us in the madness! Iggy & The Stooges kicked some serious ass, and we’re still recovering. Was anybody else amazed by how awesome The Replacements were, considering their long break since 1991? If you’re already missing our delicious Riot Fries, have no fear! Riot Fries are still on the menu!!! In the meantime, check out these wicked shots taken by Geoff Stairs! Got some Riot Fest pics of your own? Post them on our wall HERE!

These good looking dude’s were serving up food for all you hooligans! We also had our best serving up some Ribs in the VIP area. #Babes So it’s safe to say there were a lot of you there! Oh and Iggy and The Stooges played an UNREAL set. Did you catch it? We still can’t get over it! And The Ghost Inside was pretty fucking epic. And we threw down SO hard in the circle pit for Every Time I Die!! Serving food to the stars (and amazing Riot Fest Staff) Lastly, did you try the Mini Riot Fries? Sneaky Dee’s, Truth Explosion, and The Sound Academy have partnered up to deliver a night of awesome eats, beats, and other sweet treats! Keep on reading for the deets! (Sorry about that, we had to).

Old-school California punk band, FACE TO FACE (Rise Records) are playing The Sound Academy on September 5th in Toronto! You can enter to win this MEGA special contest for yourself and three friends to win an EPIC NIGHT OUT!

WHAT YOU CAN WIN

Your magical night will begin at Sneaky Dee’s where you get to devour two delicious Kings Crown nacho platters. Not only that but you will also get some pretty cool swag including merch and signed CDs from the band! After that, you and your friends will hop in a free cab (provided by Hailo) which will bring you face-to-face with FACE TO FACE for a Meet & Greet with the band! Followed by free tickets to the show on Septembet 5th at Sound Academy!  If you haven’t fallen over in excitement (and nacho-induced drowsiness) by the end of the night then you, my friend, will be deemed a true warrior.

Follow the link below and register and you are automatically entered to win this amazing prize pack! http://guestlistapp.com/events/177591

Living under a rock? Check out Face to Face here!

Buy tickets for the show here

At last! Riot Fest is only a few days away and we’re totally stoked! If you haven’t already planned out your Riot Fest experience, you should check out all the wicked bands here [http://riotfest.org/toronto-lineup/]! Picked up your tickets yet? It’s not too late! Head over to Sneaky Dee’s to grab your ticket and to try out our RIOT FRIES at a discounted rate before they go out of style (prices below)! We’re also holding two contests where you can WIN VIP TICKETS & WEEKEND PASSES (see below)! The Sneaky Dee’s team will be on-site at Riot Fest in full force with a special festival vendor booth. Swing by for some tasty tex-mex treats and don’t forget to tag the Dee’s graffiti wall!

Sneaky Dee’s is currently holding two contests to share their excitement for the festival.

1. Sneaky Dees patrons and Riot Fest fans are encouraged to take a picture of the decadent dish via Instagram or Twitter. Don’t forget to include the following in order to qualify for your chance to win the VIP ticket upgrade!

2. “The Sneaky Dee’s and Union East Riot Fest Graffiti Contest” To enter for a chance to win a sold out weekend pass, Dee’s patrons can take pictures of their favorite pieces of graffiti at the restaurant and venue. 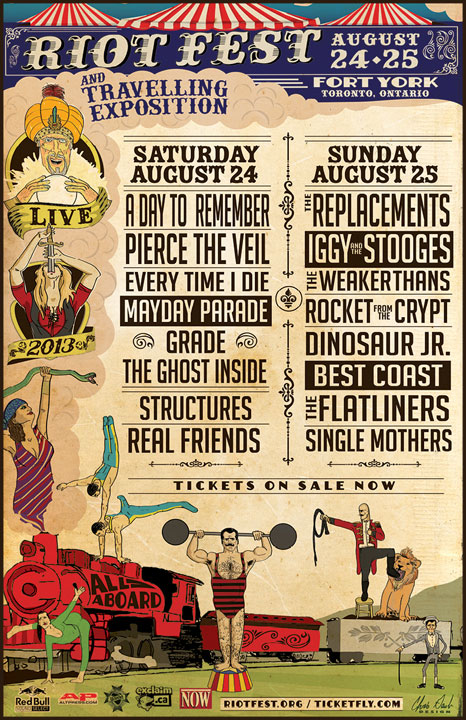 We’re super stoked for Riot Fest to go down next weekend (August 24th at 25th) with Mayday Parade, A Day To Remember, The Replacements, Iggy & The Stooges, The Flatliners & SOOO MUCH MORE!!! We have been gearing everyone one up by serving Riot Fries topped guacamole, sour cream, & veggie chilli with melted cheese for only $9.95!! You can even buy your tickets for a discounted price when you order riot fries. (Saturday Ticket w/ Riot Fries Combo: $54.93 Sunday Ticket w/ Riot Fries Combo: $69.93).

BEST OF ALL, we will be serving up some delicious eats ON-SITE!

If you haven’t heard yet, entire weekend passes are SOLD OUT! But no worries, we got your back! Let us introduce to you “The Sneaky Dee’s and Union East Riot Fest Grafitti Contest”! Enter for your chance to win a pair of weekend passes!!!

Here’s what you need to do:

Snap a shot of your favorite Sneaky Dee’s graffiti and post it on Facebook, Twitter, or Instagram (or all three!), tag us in the post (@thesneakydees & @theunioneast) and use the hashtag; #RiotFest – We’ll create a photo album on our Facebook page and the best photos will win FREE WEEKEND PASSES TO RIOT FEST!
So what are you waiting for? Head over to Sneak’s for some tasty eats and start snappin’ that phone! Have you downloaded the Sneaky Dee’s App yet!? With your sexy new app you can easily stay up to date with our social media, new DELICIOUS menu additions, and events! And now we introduce you to “Show Your App Mondays!”

If you haven’t had one of our FUCKED UP BREAKFASTS yet, you’re definitely missing out! The Queen of Heart Attacks is a mountain of bacon, ham, sausages, pulled pork, eggs benedict, and even more greasy deliciousness. The Fucked Up Breakfast (tex-mex style) gives food lovers a taste of the extraordinary with enchiladas, eggs, peppers, cheese, salsa mole, PLUS a flour tortilla bowl filled with beans, cheese, and EVEN MORE delicious texy-mexy toppings!
Download the app here: volu.me/sneakydees